After Sochi 2014: Costs and impacts of Russia’s Olympic Games

The 2014 Sochi Winter Games were record breaking on many levels. In this article, Martin Müller from the University of Zürich looks into the costs and the after use of facilities and infrastructure constructed for the most expensive Olympics ever.

At $1.26 billion, they also produced the highest revenue from broadcasting rights ever. Less than three decades earlier, the 1988 Winter Games in Calgary were barely half as large, which exemplifies the tremendous growth of the event, defying attempts on the part of the IOC to contain ‘gigantism’. The Sochi Games were also among the top 10 of Wikipedia articles that were most frequently edited and viewed in 2014, further attesting to the public interest in the event (Keegan 2015).

The exorbitant costs of the Sochi Games

But the one record that Sochi will be remembered for is a more dubious one: the most expensive Olympic Games ever – summer or winter. The total costs linked to the 2014 Sochi Olympics were just under $55 billion (RUB 1,652 billion) (see Table 1).

More than 90% of the costs were capital costs, indicating the large share of construction for these Olympics (see Figure 1 for an overview of the most important construction). Indeed, such a high proportion of capital costs as a share of total investments was previously only reached by Tokyo for the Summer Games of 1964 (Liao and Pitts 2006, 1247). 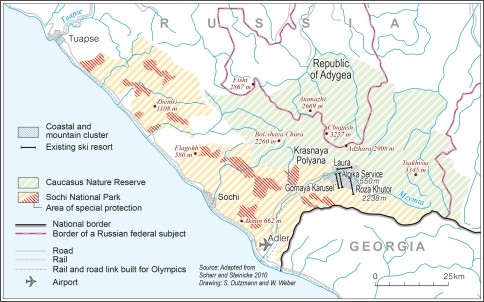 Map of post-Olympic Sochi with key infrastructure and coastal and mountain clusters. Click the photo for a larger edition of the map.

The games in Sochi were not just expensive. They also experienced significant cost overruns as the final budget was several times higher than the budget in the bid book. In nominal terms, the whole project became about 4.5 times more expensive than planned ($55.0 vs. $12.3 billion).

The costs for venues escalated particularly strongly, with a nominal 585% cost overrun (337% in real terms after controlling for inflation). The Olympic Stadium and the Main Olympic Village came in 12 times more expensive than budgeted. These massive overruns are all the more surprising, considering that the bid book stated that “expenses are forecast on the ‘high side,’ recognizing that expenses for Olympic Winter Games are typically under-estimated at this stage” (Bidding Committee Sochi 2006, 99).

Table 2. Comparison of cost in Sochi 2014 with previous Olympic Games

*estimates, ** cost overruns do not include cost for supporting infrastructure (for which no original budget was available). Sources: Flyvbjerg and Stewart 2012; own calculations. See more detailed table including data on Olympic Games back to Grenoble 1968 in a pdf here.

When the costs per sports event are calculated – one way of standardizing expenditure by controlling for the size of the Olympics – Sochi leaps to the front. Organizers spent $120 million (2009 figures) on each of the 98 events – 2.5 times more than the next most expensive candidates. The president of the IOC, Thomas Bach, is thus wrong when he claims that “costs for the Sochi Games are entirely within the bounds of those of previous Games” (Süddeutsche Zeitung 2014).

Further use of the Sochi venues

The prospect for the after-use of venues is rather bleak. Most of the venues in the mountain cluster will be used as training sites for future Olympic athletes (see link to full Table 1), but the future for the six stadiums and the main media center in the coastal cluster is uncertain. The Olympic Park sees few tourists because of the absence of attractions and its remoteness relative to the city center and the main beaches.

The after-use that exists is mostly not specific to the purpose of the venues; i.e. it does not use the venues for what they were built. The speed skating oval is now home to a tennis academy, the figure skating stadium might become a velodrome, and the small hockey stadium is a sports center for children (see Table 1).

Other after-use plans require significant additional investments. The Olympic Stadium, which hosted just two events, the opening and the closing ceremony, is undergoing reconstruction for hosting several matches during the 2018 FIFA World Cup to be held in Russia, but for that purpose it will have to be expanded by another 5,000 seats and converted for an additional cost of 3.5 billion rubles ($52 million) (RIA Novosti 2014). What will happen after the four to five matches of the World Cup have been played is unclear, since Sochi lacks a football club to fill a stadium of this size.

High maintenance and operation costs also hamper the after-use. Authorities initially estimated the annual costs at about $233 million (7 billion rubles), but then revised this figure upwards to $399 million (12 billion rubles) (Volkov 2014). This amount is equal to 6.5% of the budget of Krasnodar Province, the post-Olympic owner of most of the venues. It is hard to see how the revenues from the after-use would cover these costs, let alone recoup the construction costs for the venues.

The preparation for the Olympic Games in Sochi started with a great promise: “All of this is going to be used by millions and millions of citizens – even before the Games and many years after” (Vladimir Putin, quoted in RIA Novosti 2007).

One of the big hopes attached to the Sochi Games was to increase people’s quality of life in exchange for the years of disruption and construction they had to endure in the run-up to the mega-event.

And indeed much has been achieved on this count; Sochi now has bypass roads that alleviate the traffic on its main thoroughfare and a fast road connection from the coast to the mountains. With several new power stations, it also boasts a more reliable energy supply. The implementation of new standards of urban planning pushed accessibility to the top of the agenda, with widespread level access for mobility-impaired groups such as wheelchair users or people with strollers. Cycling and other means of slow transport have received more attention and separate road spaces.

However, the most ambitious and expensive project – and the most advertised one – has not come off the ground. The railway connection from Sochi and the airport to the mountains has not become, as its Russian name lastochka suggests, a swift swallow, but rather a lame duck.

Its first problem had to do with the routing, which turned the station at the airport into a branch line, as is evident from Figure 1. This makes it necessary to change trains if one wanted to travel from the airport to the mountains. The schedule of trains, however, was not synchronized, causing long waiting times for that journey. On top of this, the operator, Russian Railways, cut the train service to the airport to just two train pairs per day. Even between Sochi and Krasnaya Polyana, there operate just six train pairs a day, taking on average 45 minutes to cover the 48 kilometers from Adler to Krasnaya Polyana. The upshot is a new $10 billion road-railway connection where the branch to the airport is almost completely abandoned and the main line has intermittent service.

The oversized and expensive infrastructure and the dire economic situation of many investors, unable to recoup their investments or even fund operating costs, will require funding for years to come.

Table 3 lists an overview of expenses and foregone interest that the Russian government has already announced, including the costs for the maintenance and operation of Olympic venues, the operation of Formula 1 as an after-use of the Olympic Park, tax breaks for owners of Olympic infrastructure, and the moratorium on interests owed for Olympic mortgages with the state VneshEconom bank.

Future event-induced costs add up to more than $1.2 billion per year, of which $400 million are for maintenance and more than $750 million for foregone revenue. This is not counting the cost of other measures, such as moving state-sponsored events to Sochi to fill empty rooms, which is a net loss somewhere else in Russia. The after-effects of Sochi will indeed be felt for a long time  – although not quite as the Russian goverment intended.