It is the responsibility of sport governing bodies to support and encourage humanitarian athletes who speak out for causes grounded in the principles of Olympism, argue Mary Hums, Eli A. Wolff and Nina Siegfried in this comment.

During this time of civil unrest around the globe, an increasing number of voices are joining the chorus to put an end to systemic racism and police brutality including athletes at all levels – Olympic/Paralympic, professional, intercollegiate, and interscholastic. A number of today’s athletes are taking actions that would define them as humanitarians. Within the sportscape, this can take many forms, one of which is the philosophy of life known as Olympism.

Yet these humanitarian athletes who exemplify Olympism may not always be supported in their stances by sporting world. Sport governing bodies, however, have the ability to serve and facilitate humanitarian athletes who choose to live their lives in the spirit of Olympism. The purpose of this article, on the occasion of Olympic Day, is to reflect on the ability of these athletes to speak out and how their respective sport governing bodies can assist in getting their message out to the public.

First, however, we need to provide baseline definitions and examples of humanitarians and Olympism, and then we will follow up with the role sport governing bodies can play in supporting athletes who wish to promote the social justice agendas important to them.

Defining what it means to be a humanitarian

What does it mean to be a humanitarian? A career guide defines it thus: “A humanitarian is someone who actively engages in promoting human welfare and social reforms, and who has no prejudice with human suffering on grounds of gender, sexual orientation, religious or national divisions. A humanitarian's goal is to save lives, relieve suffering, and maintain human dignity. This can be done in the form of rescuing and providing safety for refugees, providing shelter and food for the homeless, or helping people in the aftermath of natural disasters or civil unrest”.

While all of these are important, this article will focus primarily on athletes who take an advocacy stance related to civil unrest as we see in the current global groundswell of support for an end to racism and police brutality.

Humanitarians around the world embody the definition above. Examples of well-known humanitarians include Martin Luther King, Desmond Tutu, Nelson Mandela, Greta Thunberg, and Malala Yousafzai, while Muhammad Ali is an example of an athlete humanitarian.

An important element or dimension of being a humanitarian is advocacy. Humanitarians, with their goal to maintain human dignity, are advocates for the causes they represent and care about. We can see this as a common thread connecting the humanitarians mentioned above.

As we are interested here in the sporting context, how do we see humanitarian actions in the world of sport?

Principle 1. Olympism is a philosophy of life, exalting and combining in a balanced whole the qualities of body, will and mind. Blending sport with culture and education, Olympism seeks to create a way of life based on the joy of effort, the educational value of good example, social responsibility and respect for universal fundamental ethical principles.

Principle 2. The goal of Olympism is to place sport at the service of the harmonious development of humankind, with a view to promoting a peaceful society concerned with the preservation of human dignity.

Principle 4.The practice of sport is a human right. Every individual must have the possibility of practising sport, without discrimination of any kind and in the Olympic spirit, which requires mutual understanding with a spirit of friendship, solidarity and fair play.

Principle 6. The enjoyment of the rights and freedoms set forth in this Olympic Charter shall be secured without discrimination of any kind, such as race, colour, sex, sexual orientation, language, religion, political or other opinion, national or social origin, property, birth or other status.

According to sports historian Norbert Müller, the Principles of Olympism reinforce humanitarian messages and themes through:

Aligned with humanitarianism, the active language in the Principles of Olympism reinforces a call for engagement, and seemingly encourages the same advocacy by athletes displayed by humanitarians outside of the sporting realm.

Examples of athletes engaging in advocacy grounded in humanitarianism and Olympism include the historic salute by Tommie Smith and John Carlos at the 1968 Mexico Olympic Games, and the trend has continued with Megan Rapinoe kneeling at United States Women’s National Team international friendlies, the salute and kneeling gestures at the 2019 Pan Am Games by USA athletes Gwen Berry and Race Imboden, and finally English Premier League players taking a knee and wearing jerseys emblazoned with Black Lives Matter on the back as the league began action in June 2020.

While these athletes certainly have the platform to get their message out to thousands via social media, podium protests, wearing kit with supportive messages, and joining in marches, they do not always feel supported in taking their public stances.

What can create an environment in which athletes would feel not only free to express their views but also supported in their humanitarian actions? This is where sport governing bodies can play an important role.

While this is a solid baseline definition, good governance transcends it and includes numerous tenets, of which the most frequently mentioned are democracy, solidarity, accountability, and transparency. 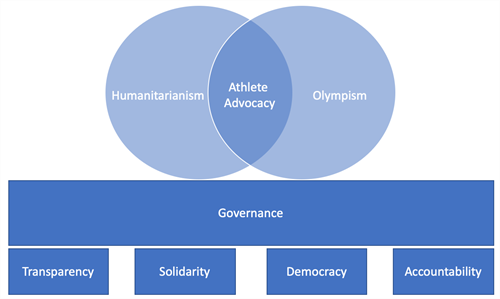 The chart included in this article illustrates how the basic tenets of good governance can serve as a base of support for athletes who wish to express their advocacy positions. Democracy implies a freedom of expression. Solidarity reinforces support and unity. Accountability means people are responsible for the ramifications of their actions. Finally, transparency includes not only letting the light shine into an organization from the outside but also letting the light shine out from the inside. When these pillars of good governance are present, athletes can feel their voices, are not just allowed to heard, but encouraged to be heard.

Let’s take a look at some selected sport governing bodies and their actions relative to this topic.

In June 2020, The Commonwealth Games Federation (CGF) issued an open letter signed by President Dame Louise Martin and Chief Executive David Grevemberg stating, “Surely it is time for the world of sport to grant itself a social and moral licence. A licence to use all its platforms to encourage athletes, coaches, officials, sponsors, administrators and fans to inspire, to educate, to stand for what they believe in. A licence to provide the scope and freedom for all our participants to be agents of change, advocates of integrity and ambassadors for respect, impartiality and non-discrimination.”

In contrast, the IOC takes a different approach. Rule 50 in the Olympic Charter states “No kind of demonstration or political, religious or racial propaganda is permitted in any Olympic sites, venues or other areas”

Almost 60 years after Tommie Smith and John Carlos, “Displaying any political messaging, including signs or armbands”, “Gestures of a political nature, like a hand gesture or kneeling” and “Refusal to follow the Ceremonies protocol” are still subject to disciplinary action.

While IOC president Thomas Bach touted potential revision of Article 50 through consultation with the IOC Athletes Commission, criticism about bans on demonstrations at the Olympic and Paralympic Games have intensified. For example, Global Athlete has called upon the IOC to act immediately to abolish Rule 50 in order to align with Article 19 of the Universal Declaration of Human Rights which outlines the right of freedom and expression.

Rules not always in line with policies of sports organizations

The Bundesliga (German Football League) recently saw Schalke’s Weston McKennie, Mönchengladbach’s Marcus Thuram, and Dortmund’s Jadon Sancho and Achraf Hakimi all speaking out, showing solidarity with and demanding justice for George Floyd. As these players chose to express their solidarity through statements on their game apparel, they could be held accountable for their actions.

Political statements on game apparel are forbidden by the Deutsche Fussball Liga (DFL), the Deutscher Fussball-Bund (DFB), as well as FIFA.

Outlined under Law 4 in the Laws of the Game, FIFA states: “Equipment must not have any political, religious or personal slogans, statements or images. Players must not reveal undergarments that show political, religious, personal slogans, statements or images, or advertising other than the manufacturer's logo. For any offence the player and/or the team will be sanctioned by the competition organizer, national football association or by FIFA.”

The ambiguity in the statements of the soccer governing organizations leaves sport organizations room for interpretation. In the case of the Bundesliga players, while a DFB led investigation had to be initiated due to the governing rules, both DFB president Fritz Keller and FIFA president Gianni Infantino expressed their support with the anti-racism statements. These statements were consistent with the on-going anti-racism efforts of FIFA and DFB.

Good governance helps support the case that humanitarian athletes who speak out for causes grounded in the principles of Olympism should be granted freedom of expression and all of the rights and freedoms that accompany good governance.

While the CGF openly expressed their support for athlete advocacy, we still see hesitancy in support for athlete freedom of expression from other major sport governing bodies. Even though the rules are blamed, those very same rules are part of governance structures which silence athletes in their humanitarian efforts.

It is the responsibility of sport governing bodies to establish the structures which specifically support and encourage their humanitarian athletes who strive to live up to the values of Olympism. This starts with changing the language and rules that prohibit athletes’ freedom of expression during sporting events.

Through the examples of humanitarians, the principles of Olympism, and the support framework of good governance, there is indeed a strong case for the place of athlete advocacy in and through sport. Through this article, we have attempted to provide a unique and different perspective that contributes to the conversation and shapes the dialogue regarding the place of athlete advocacy and its central role and contribution in sport and in society.

On this Olympic Day, we hope that athlete advocacy secures a safe and welcoming place in sport, a place where athletes are free to use their public platform to speak out on the issues of the day not only without fear of reprisal, but with authentic support from their sporting homes.

Visit the theme page on athlete power and representation