NOlympics Anywhere: A transnational movement to stop the Olympic Games is gathering strength

At the start of 2019, it was fair to say there was no single transnational anti-mega-event movement. In a matter of months, this changed as anti-Olympics organisers from Rio de Janeiro, Pyeongchang and Seoul, Tokyo, Paris, and Los Angeles came together in Tokyo in July with the goal of solidifying their transnational connections into an active movement against the Olympic Games.

In today’s network society, sociologist Manuel Castells argues, “networks of power are usually global, while the resistance of counterpower is usually local.” Therefore, he adds, the question of “how to reach the global from the local, through networking with other localities - how to “grassroot” the space of flows - becomes the key strategic question for the social movements of our age.”

As an LA-based researcher and a participant in the NOlympics Anywhere summit in Tokyo, I report on this summer’s events in Tokyo and offer an early analysis of this new transnational movement as it aims to “grassroot the space of flows,” not only around the Olympic Games but also more generally around the contested future of our global cities.

Communication among anti-Olympics organisers and critics of the Olympic Games predates the current cohort of recent and designated Olympic host cities. But this cohort has ramped up transnational solidarity and exchange to a new level. Even before this year’s summit, organisers were sharing stories and identifying similar trends across their cities through a mix of bilateral in-person visits, phone and Skype calls, and social media exchanges. As they note in a joint statement written largely before they came together in Tokyo:

“The specifics may differ in scope and scale, but the broad forces that the Olympics unleash wherever they take root are the same: the expansion of police and military surveillance, rampant corruption, crippling financial waste, environmental degradation, mass displacement, and the trampling of individual rights.”

Image from NOlympics LA. List of “shared political conditions and struggles” informed by conversations in Tokyo.

What set this summer’s summit apart from previous interactions was both the coordination of representatives from more than two cities and the event’s explicit goals. Organisers were not just travelling to Tokyo to exchange knowledge, although that was certainly part of it. They were travelling with the goal of building a transnational movement. Before the Tokyo trip, NOlympics LA’s Anne Orchier reflected on the questions she hoped would shape discussions on the visit:

“What is it that we need to build or what is it that we can build together that will resist the Olympics? A machine of sorts that will resist the Olympics in a meaningful and powerful way, not just in individual cities but as a whole. The International Olympic Committee and Olympic boosters - they're organising on a transnational level, so it is sort of incumbent on us to do the same if we actually want to stop them.”

Orchier’s question was a central one throughout the week in Tokyo. The itinerary featured a high-visibility protest in the rush hour chaos of Shinjuku as well as a series of smaller demonstrations; a range of meetings on topics from housing rights and environmental degradation to uncritical Olympics media coverage; bus tours of Olympic venues and Fukushima, where the government’s claim of ‘recovery’ from the 2011 nuclear disaster is disputed by many evacuees; and social events from soup kitchens to picnics. 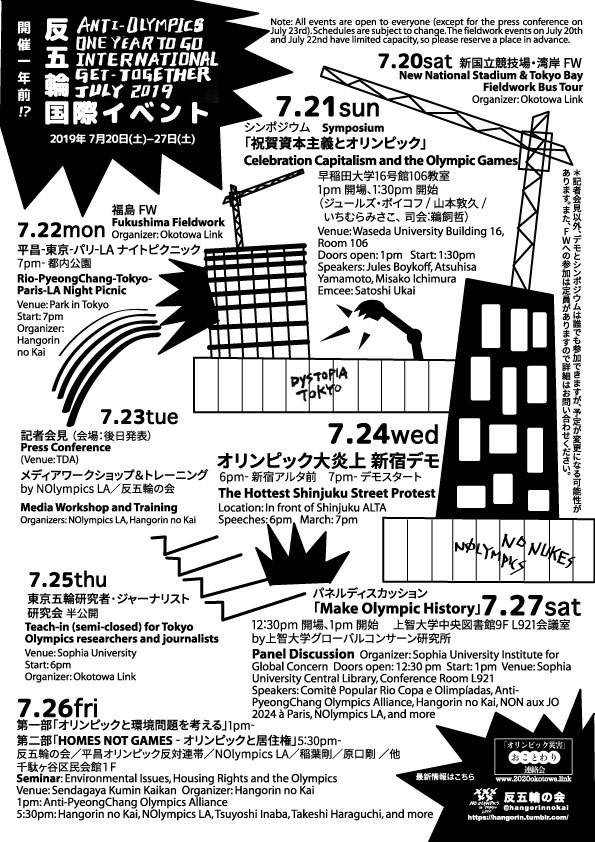 Planning the summit’s busy line-up of events required more frequent and deep communication between cities. The process of writing a joint statement, for example, actually began months beforehand, with numerous drafts zooming across the internet, pushing the transnational team of writers to debate framings and potential priorities. But meeting in person offered something special, a more intangible sense of collective effort and solidarity. Satoko Itani, a professor of sports and gender at Kansai University and part of the team organising the summit, said:

“Being there, meeting, and making real human connections help us, give us hope, give us a little more dedication to the work we are doing. And if I got to see you face to face when LA has to fight again I feel like I would be more willing to meet you and participate in your resistance.”

In the past, anti-Olympics activists in a given host city have tended (unsurprisingly) to turn their focus away from the Games after the circus leaves their town. There is a determination among this group, however, to fight the Olympics as a transnational issue requiring an extended struggle. Key to this approach is the movement’s shared analysis of the Games as an accelerator of larger global trends: widening inequality as governments are co-opted in the service of financial speculation at the expense of basic rights and shared resources.

Supporters of the International Olympic Committee (IOC) argue that in recent years the organisation has heard its critics and shown willingness to change. But the NOlympics Anywhere movement isn’t buying it. The movement’s joint statement asserts:

The IOC has made some adjustments, but for anti-Olympics activists, several of its stated changes ring hollow. In 2014 the organisation declared its commitment to ensuring human rights standards in host cities in Agenda 2020, and then promptly awarded the 2022 Winter Olympics to Beijing — the city that displaced an estimated 1.5 million people to prepare for the Summer Olympics in 2008.

The more recent decision to encourage referenda on hosting the Olympics “where formal public consultation or approval is required” has not been framed as a commitment to the principle of letting a city’s residents decide whether they want Olympic forces in town. Rather, some anti-Olympics organisers suspect, the IOC wants referenda to take place earlier (and quietly) in more informal bidding processes, and perhaps only in those pesky cities that would insist on democratic input anyway.

Meanwhile, the IOC’s ‘New Norm’ emphasises the ways cities can spend less to bid for and host the Olympics. While few people would disagree that recent trends of public spending on the Games need to end, the focus on costs and stadium construction overlooks (and distracts from) more structural issues. For example, the New Norm encourages fewer new sports arenas but displacement for the Olympics has rarely been just a case of removing homes to build sports infrastructure. Instead, activists from Rio to Tokyo and to LA have argued that developers and allied politicians use the Olympics deadline as a justification to expedite tangentially related development projects, some of which create excuses for direct evictions while others accelerate real estate speculation and gentrification.

For participants in the NOlympics Anywhere movement, the IOC and its allies have never taken seriously the connection between the Olympics and displacement; they have never understood why cities don’t want an undemocratic European institution to team up with their city’s wealthy elites to put on a media spectacle; and they have never actually stood up for human rights.

It is worth noting that even as the IOC’s reforms imply tacit acknowledgement that its system was broken, the organisation still refuses to call any past Games anything but a success. The Rio Olympics saw the eviction of 77,000 people, an increase in police killings, zero environmental legacy goals met, and an actual ‘state of calamity’ declared in the State of Rio de Janeiro, and yet Thomas Bach labelled it a successful Games. If the IOC refuses to critically reckon with the problems of recent Olympics, participants in NOlympics Anywhere wonder, why should cities give it the benefit of the doubt going forward? The participating groups in the NOlympics Anywhere movement do not want a ‘better Olympics’ in their cities. They don’t want the Olympics in their cities at all.

Right to the city

NOlympics Anywhere groups don’t want the Olympics in their cities at all, but they also want more than that. Saying ‘no’ to the Olympics is actually about saying ‘yes’ to imagining alternatives: alternatives in which a city’s development is not at the whim of local and global elites; alternatives in which historically marginalised communities have the power to shape the future of their neighbourhoods and their city. As the movement points out in its joint statement:

“Instead of the Olympics, we want permanent and truly affordable housing for all our cities’ residents, in healthy and sustainable environments, with access to jobs, education, culture, and community ties. Instead of the Olympics, we want the power to decide what happens in our city in accordance with our real needs, not the speculative interests of the global financial elite.”

Demands for the right to the city have been a central theme of anti-Olympics organising around most twenty-first century Games and bids. As organisers who fought Hamburg’s 2024 bid wrote in an earlier article in this series, their slogan was: “Something better than Olympic Games!”

At the NOlympics summit, unhoused residents from Tokyo exchanged ideas with visitors who included one participant evicted to make way for an Olympics-related development in LA, another participant who took part in the 1968 anti-Olympics protests that ended in a massacre by Mexico’s armed forces, and veterans of building occupations in Seoul. They hold diverse visions for the future of their cities, but curiously none of their visions requires a multi-billion dollar three-week sports event to hijack their city’s planning agenda for a decade.

For the NOlympics Anywhere movement, cancelling the Olympics in any of the currently scheduled host cities would alleviate some of the specific pressures threatening communities and the environment but, crucially, it would also be an enactment of the community power they are looking to build on a global scale.

Following the first transnational anti-Olympics summit, movement participants are now experimenting with various ways of collaborating across time zones and oceans. In October 2019 NOlympics LA spoofed serving an oversized eviction notice to the IOC and LA2028, denouncing the “tenant” for having “willfully facilitated an international mega-sports spectacle without any democratic buy-in from the city’s residents.” Tokyo organizers then adapted the protest when the IOC visited their town.

In another collaborative project, the Tokyo-based collective, Hangorin no Kai, published a zine documenting the activities and lessons of the summit it co-hosted with the anti-Olympics coalition Okotowalink. The zine features pages by NOlympics LA, NON aux JO2024 à Paris, the Anti Pyeongchang Olympic Alliance, Rio’s Popular Committee on the World Cup and Olympics, and London’s Counter Olympics Network. These groups are now in conversation with activists in Milan, the newly selected 2026 host city, and are developing points of unity to better define and shape their movement going forward.

This is the global community the IOC never intended to create; the real ‘movement’ about the Olympics. And it’s just getting organised.

Protests and the Games

In a series of articles, Play the Game will zoom in on the protest campaigns that have characterised Olympic bidding during the past ten years. What types of gatherings are these groups, and have they been able to change the institutions and event formats that they are protesting against?These are some of the issues that will be looked into when international experts share their research into the phenomenon.
See the other articles in the series

Read the other articles on protests and the Games