The number of new clubs entering the Champions League has fallen this season as many of the same coterie of clubs continue to dominate leagues across Europe.

According to Play the Game’s Diversity League Index 2020/2021, only six new clubs entered the Champions League after a season that was cut short by the corona pandemic. 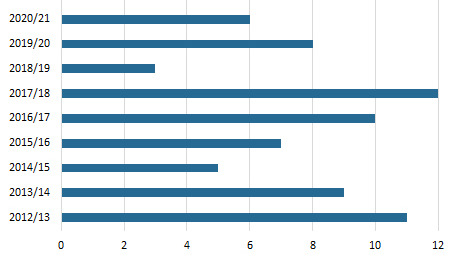 The index measures how often the same teams appear in the world’s richest club competition since the 1994/95 structural changes that heralded the modern UEFA Champions League (UCL). The larger the index figure, the more often the same clubs appear.

The diversity index works by dividing the accumulated number of UCL places over the years by the numbers of clubs taking part. Liechtenstein does not enter clubs into the UCL

According to the index, the same winner or club was on top when play was abandoned due to Covid-19 in 24 out of the 54 UEFA members to supply teams to the Champions League.

Celtic were declared Scotland’s Premier League champions for a ninth season in.a row after the Scottish season was cut short in May, while Ludogorets Razgrad have won eight successive Bulgarian titles and RB Salzburg’s Austrian dominance stretched to seven championships in a row.

In Belarus, the longest European hegemony was broken in 2019, when Dinamo Brest ended BATE Borisov’s run of 12 continuous titles. In Cyprus, APOEL’s run of seven straight championships was ended and Omonia took the country’s sole UCL spot after the Cypriot league was controversially abandoned when the club was level on points with Anorthosis Famagusta.

The same clubs won third successive titles in Lithuania, Serbia, Switzerland and the Ukraine though. Only four different clubs have represented Ukraine and Greece since 1994/95. This dominance is fuelled in part by UCL prize money, which has helped Qarabag Agdam win seven successive titles in Azerbaijan.

In France and the Netherlands, the corona pandemic meant that no championship was awarded but Paris Saint-Germain and Ajax Amsterdam were on top again when play was abandoned – just as they were in 2018/19.

Allegations of matchfixing in Andorra

With football suffering economically due to the pandemic, cash from UEFA has become more important than ever, and a troubling indication of its significance has emerged in Andorra with allegations of matchfixing in the country’s top league.

Inter Club d'Escaldes won their first Andorran title this summer to qualify for the UCL, where they were promptly eliminated 2-1 in the preliminary qualifying round by Kosovan champions Drita. Although UEFA has not declared prize money for the new UCL season, Inter’s solitary match was worth €490,000 based on figures from last season.

According to UEFA’s latest Club Licensing Benchmarking Report, average club revenue in Andorra is only around €300,000 and the lure of UCL prize money motivated an alleged pact to fix the 2019/20 Primera Divisió championship.

The alleged collusion failed as Inter also won the cup for a historic double, but at the end of the match Sant Julià’s players told their opponents “in the last match we went to 30% so that you could win the League” according to the refereeing report uncovered by Diari d'Andorra.

The incident is reportedly being investigated by UEFA and highlights the growing importance of European prize money in smaller countries, which are more at risk to match fixing according to a recent Europol report.

Average club revenue is below the annual threshold of €5m in 32 of UEFA’s 55 members according to its latest Club Licensing Benchmarking Report, although individual clubs in these countries may earn more and fall under the Financial Fair Play microscope.

Inter Club d'Escaldes from Andorra were one of six clubs to enter the 2020/21 UCL for the first time in the modern era but winning a title in most countries supplying debutants requires less investment as average club turnover is very low.

Average club revenue is €3m in Belarus and only €2.1m in Finland, whose representatives KuPS last won the Veikkausliiga in 1976, when the UCL was only a marketing dream.

In 1998, HJK Helsinki was the first – and so far, only – Finnish club to reach the UCL group stages. Two seasons later, Maribor became the first Slovenian side to do the same but emulating this is surely beyond this season’s Slovenian debutants NK Celje. In Slovenia, where average club revenue is €1.8m.

Three of the debutants were eliminated by the end of the first round and only French debutants Rennes have a realistic chance of reaching the group stages, which was worth €15.25m in 2019/20.