Proposals for a closed European Superleague were shot down earlier this year but research shows that UEFA's Champions League in effect may be just as closed with only three new clubs out of 75 reaching the group stages over the last decade.

Proposals for a closed Superleague by a dozen of Europe’s biggest teams looked to close off the top level of European football to all but a handful of teams. However, according to research by Play the Game the process of closing ranks is in practice already happening in the Champions League.

The research shows that only three of the 75 clubs to make their debut in the modern Champions League over the last decade have reached the group stages from the qualifiers.

The clubs are Portugal’s Braga and Malaga from Spain that both qualified for the 2012/13 group stages via a play-off, and Russian club Rostov that emulated this feat after winning through two qualifiers in 2016/17.

Four other clubs making their UEFA Champions League (UCL) debut in the last decade were gifted places in the group stage courtesy of their country’s strong UEFA club coefficient ranking, which is based on past performance by all clubs from that competition.

Last season, French club Rennes went straight into Group E courtesy of Ligue 1’s strong coefficient. Serie A’s ranking put Atalanta straight into Group C in the 2018/19 season and the Bundesliga’s strong track record took RB Leipzig straight through in 2017/18. And in 2016/17, Leicester was the only one of these seven UCL debutants to win their domestic title with their surprise victory in English Premier League guaranteeing a group stage place.

Greece and the Ukraine are the least diverse

The findings stem from research carried out in connection with the 2021/2022 edition of Play the Game’s annual UCL Diversity Index. It shows that Greece and the Ukraine remain the least diverse countries in terms of UCL participants with just four clubs sharing the 53 and 50 places available to them respectively over the course of the competition since the changes to the Champions League in the 1994/95 season, which heralded the modern UCL.

In contrast, four different clubs have taken the five places offered to Kosovo since the winners of the former Yugoslav Republic’s Superleague were first admitted to the UCL in 2017/18. FC Prishtina - the most famous club when Kosovo was part of Yugoslavia - has won 11 domestic titles but none in the past five years.

FC Prishtina is one of just four clubs making their debut in the 2021/22 UCL, whose qualifiers kicked off before the Euro 2020 final on July 11. 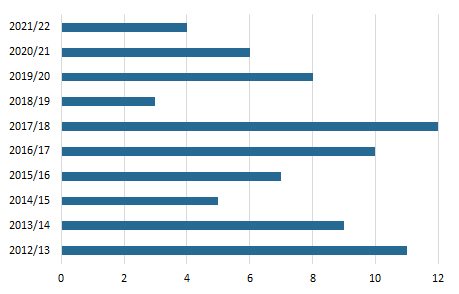 Bodø/Glimt won their first Norwegian Eliteserien in 2020 to qualify for a maiden UCL, and Teuta beat Vllaznia on goal difference to the Albanian Kategoria Superiore title for their first win since 1993/94 and a first appearance in the modern UCL.

Mura edged out regular European participants Maribor on goal difference to win their first Slovenian PrvaLiga title and were the only debutants to survive the first qualifying round.

There would have been a fifth debutant in the modern UCL era but Malta’s Hamrun Spartans were banned due to a match fixing case dating back to 2013 and runners-up Hibernians took their place.

With Villareal qualifying for the UCL after winning the 2020/21 Europa League, Spain has five clubs in the current UCL and has had more places – 103 – than any other European country since 1994/95.

Many leagues are returning the same clubs as last year

Meanwhile, many leagues are sending the same clubs back to the UCL this year as in previous years. While Atletico Madrid won their first La Liga title in seven years, 25 out of the 54 UEFA members saw the same club win their domestic title for a second successive season.Of the other Big five leagues, Bayern Munich won their ninth consecutive German Bundesliga title, and Manchester City took their third English Premier League crown in four years, while in Italy Inter Milan won their first Serie A Scudetto since 2011/12.

Domestic domination was also strengthened in many other countries.

RB Salzburg won an eighth successive Austrian Bundesliga and a UCL place for a tenth year in a row. Sheriff Tiraspol are Moldova’s sole UCL representative for a sixth straight year, while Dinamo Zagreb won for a fourth successive season and have now taken Croatia’s sole UCL spot in all but one season since 2006/07.Young Boys of Berne have the last four Swiss Super League titles, and Linfield took the Northern Irish Danske Bank Premiership for a third year in a row. but this domestic domination is particularly evident in Eastern Europe.

CFR Cluj won the Romania title for a fourth successive year. Crvena Zvezda emulated this feat in Serbia without losing a game and the leagues won by the same club for a third successive season in Hungary, Latvia, Russia, Slovakia and Czech Republic.

Evidence of competition in some leagues

There was, however, also some evidence of new competition in other leagues with Lille defying ownership wrangles and the collapse of a TV rights deal to win their first French Ligue 1 title in a decade.

In Scotland, Rangers ended Celtic’s nine-year run of league titles to return to the UCL for the first time since 2011/12 without losing a game. With Scotland awarded an extra place both Glasgow clubs are in Europe’s premier club competition and Celtic have only missed out once since 2001/02.

In Denmark, Brøndby won their first title since 2004/05, and Maccaiba Haifa also won a first Israeli league since 2010/11 but domestic domination was strengthened in many other countries.

This season, UEFA has introduced a third club competition, the Conference, to benefit clubs eliminated from the UCL and the Europa League.

Clubs in smaller countries and leagues with less financial resources, such as much of Eastern Europe, should benefit from UEFA largesse but that money could simply ensure existing domestic hegemonies continue.