The year that killed the autonomy of sport

Public trust in international sports federations was burned to the ground in 2015 due to financial excesses and corruption scandals. 2016 might be the year where autonomy of sport is replaced by true freedom of association. Play the Game’s international director gives his wind-up of a turbulent year for sport.

One of the memorable moments of our Play the Game 2015 conference in Aarhus, Denmark, came in the morning of 26 October when the Chief Ethics and Compliance Officer of the International Olympic Committee (IOC), Pâquerette Girard Zappelli, showed a slide stating what until recently was obvious to the Olympic eye:

“Respect of sport’s autonomy by governments is a must.”

Just a year ago, few would have noticed this statement as controversial, and few would have questioned when Mrs. Girard Zappelli added that autonomy of sport is “a fundamental principle”:

“When you speak about interference of governments in to the National Olympic Committees, this is absolutely key: This must not be!”

As an employee of the IOC, Pâquerette Girard Zappelli of course had no other option than to represent the orthodoxy of the Olympic movement. What made the moment special was that less than one day before, the IOC member Richard W. Pound, from January 2016 the IOC doyen - the longest serving IOC member – had already eliminated sport’s autonomy in his speech to the conference.

He called the autonomy of sport an “outdated relic from an earlier era”.

“The right to ‘autonomy’ in the sense of making and administering sport rules must be earned through responsible conduct, not mere assertion of a former and now irrelevant status,” Pound said, asking:

We should grant Mrs. Girard Zappelli and the conformist parts of the IOC that since a speech given by Thomas Bach, then Vice-President, now President of the IOC, at the Olympic congress in 2009, the right to autonomy of sport has been linked to a demand to sport to display good governance.

However, until this year it was an unspoken premise that only the Olympic family itself had the right to decide which governance was good and which was bad. In this way, the monopoly of power over sport could stay inside the Olympic family.

Try to ask the governments of India, Mexico, Kenya, Greece, Poland, Montenegro and a handful other countries who in the past decade have tried to combat sports corruption on their home turf: FIFA or the IOC reacted immediately with threats and quarantines for such unruly behaviour.

In this way, the sports movement has allowed the autonomy of sport to become a shield behind which too many sports organisations at the international and national level have become greenhouses for corruption and crime.

Like no other year, 2015 has proved that this self-serving attitude of sports organisations is leading them to self-destruction.

Police investigations across many sports

Just to summarise very quickly: No Play the Game reader is unaware that FIFA is in complete disarray after the American and Swiss authorities have indicted 39 top executives and close business allies, and we have probably not seen the end of the investigations.

The reputation of the athletics and the IAAF is spiraling down after journalists and whistleblowers have uncovered endemic corruption linked to systemic doping. The IAAF President through 16 years, Lamine Diack, barely left his office in September before he was arrested by the French police, and he is currently released on bail while criminal procedures continue. For every day that goes, fresh evidence appears that drags Diack’s successor Sebastian Coe and his trusted allies deeper into the affair.

It is lesser known that also the presidents of world volleyball and handball, Ary Graça and Hassan Moustafa, are under police investigation for fraud and embezzlement in Brazil and Germany, respectively. In Germany, where sport is subject to numerous regulations of good governance, police is now looking into possible tax fraud in relation to the German bid for the FIFA world cup.

Government interference? Definitely. And a most needed one that sport should embrace in order to be rescued from itself.

Moreover, these affairs have contributed to a lousy public perception of sport and sports organisations.

No wonder that a growing amount of taxpayers vote “No” to spending money on major sports events if they believe that sport is ruled by crooks. No wonder that a growing number of people feel alienated by a sports world that is more busy signing lucrative TV and sponsorship deals that can line their own pockets rather than developing attractive new sports activities for the average citizen.

So there are a number of reasons for the outside world to reject the autonomy of sport. And here is one more:

Sport itself never respected the autonomy of sport!

When FIFA and the IOC decide to clamp down on naughty governments they carefully select those countries that are democratic, relatively unimportant on the global sports scene – and where sport already does enjoy some autonomy from government.

FIFA has never prevented Russia’s sports minister Vitaly Mutko from seeking one of the highest offices in football. Today, Mutko is not only minister of sport, but also Executive Committee member of FIFA, President of the Football Union of Russia and chairman of the Local Organising Committee of the FIFA World Cup 2018.

Do you see any conflicts of interest or governmental interference? FIFA does not.

The double standards of the IOC

The IOC has never protested against government interference in Chinese sport, although the President of the Chinese Olympic Committee, Liu Peng, is at the same time Director of the State General Administration of Sports – which equals a minister of sport. Did that prevent the IOC from granting the Olympic Summer and Winter Games to China?

Another shining example, the Irish Patrick Hickey, President of the European Olympic Committees (EOC), embodies the double standards in the Olympic world. In spite of being appointed to “IOC Delegate Member for Autonomy”, and in spite of his responsibilities as an IOC Executive Board member, Hickey had no troubles giving the hosting rights of the EOC’s first European Games to Azerbaijan – where the president of the National Olympic Committee happens to be the authoritarian ruler of the country, President Ilham Aliyev. To add insult to injury, the president appointed his wife Mehriban to chair the local organising committee… 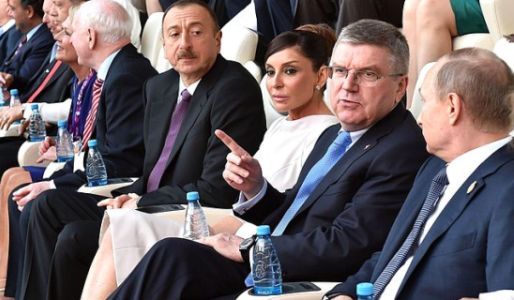 IOC President Thomas Bach talking to Russia’s president Putin and Azerbaijan’s ruling couple Mehriban and Ilham Aliyev at the opening of the European Games 2015 in Baku. Are they discussing the autonomy of sport? Photo: www.kremlin.ru

We are still waiting for the IOC President Thomas Bach to strip Mr. Hickey from his special position as a the Olympic guardian of autonomy of sport.

And it is not that Thomas Bach usually suffers from slow response time. When the steering group for sports under UNESCO – called CIGEPS – in January 2015 met at the IOC headquarters in Lausanne and decided to exclude the autonomy of sport from the new international sports charter, a guiding document for all stakeholders in sport, the IOC President reacted promptly.

Within a week he achieved a meeting with no less than the UN Secretary General Ban Ki-Moon, convincing the UN system to reconsider this decision. A compromise paragraph was produced, but even Bach could not overcome the governments’ mistrust in international sport: There is no mentioning of sport’s autonomy and the leading role of the IOC in UNESCO’s final International Charter on Physical Education, Physical Activity and Sport.

Instead of insisting on a notion that only corrupt sports leaders really draws advantage of, my hope is that the international sports movement will show respect of its historical roots and start fighting for true Freedom of Association.

This notion of autonomy is not invented so corrupt people can hide behind it. It is a basic civic right, entrenched in all democratic thinking and established in fundamental international agreements such as the Universal Declaration of Human Rights and the European Convention on Human Rights.

It allows for all sport to govern itself, as long as it is association based. When sport becomes business, it must abstain from the privileges enjoyed as an association. When sport today say that it must abide by the law, it often forgets to add that because of its association status, its business activities often enjoy much more freedom than other forms of business.

Switzerland, the home of more than 60 international sports federations and the IOC, has tightened its legislation in 2015, so that private corruption – the kind of corruption that too many sports leaders have been thriving on – can finally be prosecuted under criminal law. Another warning signal to sports leaders that autonomy their way is over.

There are unfortunately governments in this world who will never respect neither autonomy of sport nor freedom of association. Not all government interference in sport is designed to protect the athletes and the institutions from corruption, and sports organisations worldwide need to have a safe legal framework under which they can keep control of the sporting side of their activities.

There is no shortage of powerful politicians who would like to pick the players for the national team, fire the coach, put relatives in prominent sports positions or get a share of the revenues from the stadia. Sport must be protected from such abuse.

That is why governments and sports should start talking at the highest global level. At the big sports ministers conference MINEPS V in Berlin in 2013, Brazil proposed that international agreements were made to prevent that costs for major sports events kept rising to the sky. No sports body has taken the invitation.

The UNESCO charter invites “public authorities and sports organisations …  to enhance their co-operation in a spirit of mutual respect, and to minimise the risk of conflict by clearly defining their respective functions, legal rights and mutual responsibilities in physical education, physical activity and sport.”

The “mutual respect” means that sport must respect the right and duty of governments to control how they spend hard-earned money from taxpayers when giving public subsidies to sport and investing in facilities.

On the other hand, governments must respect the right of the citizens to work together in associations no matter if the citizens are sports people, coin collectors, environmentalists, rabbit breeders of high school students.

Last, but not least, if sport accepts freedom of association it will also have to respect the right to freely form alternative associations to those that exist in today’s sport. A growing number of people are seeking solutions for their physical activity outside the traditional sports system, and one important reason is that sports federations have been too conservative in administering their monopoly over a given sport.

The international federations only allow one member federation from each nation, and they aggressively defend this restriction. Even at the local level in many countries, a given sport – football, basketball, you name it – can only be practiced if the national federation allows it.

Is that a recipe for growth in participation, or simply a defense of a profitable entertainment industry?

It is striking that the same sports leaders that hail competition in sport as a way to ennoble the human character, hate the thought of facing competition in their own playing field.

If more organisations were allowed to develop and administer athletics, volleyball, orienteering, gymnastics and other sports, it would most likely increase the outreach of sport and create more access to physical activity for a larger number of ordinary people.

And isn’t this what all sports organisations say they wish?

2015 killed the autonomy of sport. It will not be missed. Let us use 2016 and the years ahead to strengthen the true freedom of association.