The road to re-election for Hassan Moustafa has been paved by admitting new national members to the IHF. During the period from 2000 to 2021, the IHF has accepted more than 60 new member associations. Many of these new member associations have little knowledge or interest in handball and do not have national tournaments either, but nevertheless, they have exactly the same voting power in the IHF as big handball nations such as Denmark, Norway, and Germany when it comes to presidential elections.

The Danish daily Politiken revealed in 2015 that out of the then 204 member associations of the IHF, less than half had a national team or a national tournament. Some of the federations acknowledged they did not even have handball players.

“At a first glance, ‘one nation, one vote’ sounds democratic, because small nations get the same voting power as bigger ones, like in the United Nations General Assembly. But this system puts the nation before the individual athlete,” says Play the Game’s international director Jens Sejer Andersen.

“If we regard each athlete as the cornerstone of democracy in sport, the picture becomes very different. How fair is it that over 750,000 handball players in Germany have to share only one vote at the IHF General Assembly where one vote is also given to tiny island states who can barely muster a national team? More influence must be given to those who are affected by decisions,” Jens Sejer Andersen says.

Play the Game has now carried out research on alternative voting systems that could be adopted by sports federations.

“Alternative systems to ‘one nation, one vote’ might lead to better governance in sport. But we need more information about how they are composed, what their advantages are, and how they affect voting power. This piece of research is a first step,” explains Jens Sejer Andersen.

In such a scenario the ‘one nation, one vote’ would not be fair, the Badminton World Federation argues:

While the federations agree on the advantages of having a weighted voting system, the impact on voting power varies.

Figure 2: Voting power for highest vote compared to 'one nation, one vote'

Another way to show the impact of the weighted voting system is to look at the distribution of votes among member associations, which is done in figure 3 for all federations. For example, 58 per cent of the member associations of the International Tennis Federations have one vote, but with the weighted voting system they only hold 19 per cent of the total votes at the federation. 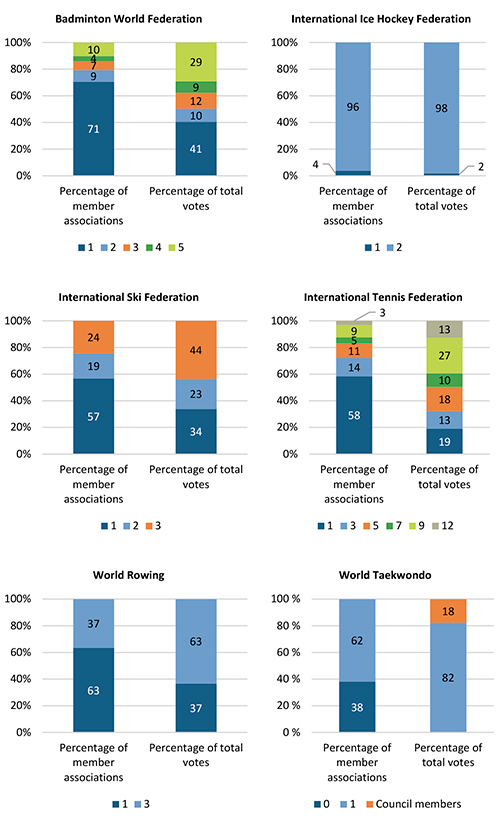 Play the Game’s research is the first overall mapping of the existing alternative voting systems in international sport. However, the mapping exercise raises a number of questions that should be followed up, Jens Sejer Andersen says:

“A logical next step is to see if the alternative voting systems have an impact on the standard of sports governance. It would also be useful to undertake more qualitative research into how the alternatives work in practice. This is probably more than we can solve alone at Play the Game, but we hope we can inspire others to follow up on this new data by making this first analysis freely available.”

The voting system in each of the seven federations has been reviewed. The composition and the criteria to determine voting power are explained below:

Badminton World Federation: All full members have at least one vote but can earn four extra votes. Four criteria are used to determine voting power, and one extra vote is given for every criterion fulfilled. The criteria are participation in international tournaments, hosting of events, sporting performance, and registered members of the national member association.

International Ice Hockey Federation: All full members have at least one vote but can earn one additional vote if they have participated in international tournaments.

International Ski Federation: All full members have at least one vote but can earn two extra votes. Members fulfilling participation and hosting criteria get two or three votes depending on grassroot members in the national organisation.

International Tennis Federation: All full members are given at least one vote. The number of votes is decided by the council at an annual general meeting or the board of directors using four criteria: Participation in tournaments, organising national and international tournaments, sporting performance, and development level of the national member association. There is no objective measure as to when criteria are met.

World Rowing: All full members are given one vote. Two extra votes can be earned if criteria are fulfilled. Criteria are three years of membership, participation at regattas and gender representation of crews at regattas.

World Taekwondo: Only full members who fulfil participation criteria and participate with a delegate at the general assembly are allowed to vote (has one vote). Member associations not meeting these criteria are not allowed to vote. Council members are given one vote.