The first major sports political battle of the year will take place this week when parliamentarians from 47 European countries discuss external oversight of international sport. FIFA attacks a parliamentary report as “incomplete, missing or downright wrong”. In contrast, UEFA is jubilant. But the perspectives reach much beyond football.

For those who believe that the Council of Europe is merely a talking club with no real scaring powers, here is a surprise: FIFA is taking the council so seriously that its President is spearheading an intense lobbying offensive to prevent the council from meddling into sport’s internal affairs.

It is true that the Council of Europe has very few binding instruments in its hands, but for almost 30 years the Council has been a front runner in defining the sports debate. In 1989 it was the first transnational institution to make an international convention that obliged the 47 member states to combat doping, and a few years ago the Council took a lead role in creating a similar, legally binding instrument against match-fixing.

So international sports organisations are keeping a watchful eye on what happens on Wednesday 24 January when the Parliamentary Assembly of the Council of Europe (PACE) meet in Strasbourg. Here, parliamentarians will discuss no less than two reports and resolutions on sports governance, one on Olympic sport in general and one focused on football, UEFA and FIFA in particular.

Although the report of MP Mogens Jensen from Denmark proposes the most far-reaching solutions for sport as a whole – arguing that “the crisis of confidence is not over” and calling for “a major overhaul of sports governance structures and practices", it is so far the report on football that has stirred up most reaction.

For FIFA is not watching this first sports political game of the year from the sideline. When news came out in early December that the Luxembourgian Member of Parliament, Anne Brasseur, had written a 23-page report arguing that the new FIFA under Gianni Infantino’s leadership resembles the old FIFA under Sepp Blatter too much, Infantino and his army of lobbyists took immediate action.

Within a few days, FIFA’s President secured a joint dinner with the Secretary General of the Council of Europe, the Norwegian Thorbjørn Jagland. According to Play the Game’s information, the two men agreed that before the parliamentarians got the chance to debate the report, it was a good idea that Infantino could make his and FIFA’s case in a meeting with the Committee of Ministers, ie. the government side of the Council of Europe.

That meeting was held on 10 January and concluded with public handshakes and promising media releases without any reference whatsoever to the critical issues raised by the other side of the Council of Europe.

Apparently encouraged by the successful PR effort, FIFA released an extensive note the following day, 11 January, under the title “Good governance at FIFA: a factual account”  which Play the Game can now reveal.

From the very start of the memo, FIFA uses the meeting with Jagland to undermine the significance of the upcoming parliamentary debate, highlighting that the Council of Europe and FIFA has now decided to work on a Memorandum of Understanding on the promotion of human rights.

FIFA cannot hide its impatience with “the fourth report in the past five years on the same topic from the same committee and a fifth report is in the pipeline”. With vitriolic understatement, FIFA declares ready to accept criticism “even from those whose image has been tarnished through serious corruption cases” – a reference to an ongoing scandal where a number of PACE members have received money and gifts from Azerbaijan in return for whitewashing the country’s image.

Even so, FIFA claims that part of Anne Brasseur’s report is “incomplete, missing or downright wrong”.

Overall, FIFA feels that their “hours of hard work” in creating “tangible, substantial change” is not honoured by the PACE report. FIFA is annoyed by the fact that Brasseur makes several subjective statements:

“FIFA reckons that personal assumptions and conjectures do not belong in a report by the continent’s leading human rights organisation, let alone as part of its argumentative grounds,” FIFA writes, overlooking the fact that PACE “rapporteurs” have a mandate to give a personal assessment of a given situation.

FIFA’s note has been circulated to Anne Brasseur’s colleagues in the Committee on Culture of PACE which adopted her critical report unanimously in early December. Moreover, as shown by the Swiss TV programme “Rundschau” on 17 January, FIFA is now successfully mobilising Swiss members of PACE to oppose the critical report at next week’s assembly in Strasbourg.

Last, but not least, according to Play the Game’s sources, FIFA has notified PACE committee members that FIFA staff will be present in Strasbourg and available for a direct contact at a preparatory meeting on Monday 22 January, two days before the debate in the assembly is scheduled.

FIFA is of course perfectly entitled to defend its viewpoints and explain its policies. FIFA should also be applauded for not ignoring what elected European politicians think and write about FIFA, such as it was often the case in the past.

Although Anne Brasseur does not spend many pages explaining every detail in the progress FIFA has made, her report acknowledges several times that FIFA has improved on a number of fronts.

However, she does insist, that “a number of problems remain” and that “a radical change in the culture of football governance at all levels is needed”. In her view, many of the reforms have still not been put into practice.

Most seriously for FIFA is the way Anne Brasseur expresses “especially strong reservations concerning the loss of independence for the so-called “independent” bodies” that oversee FIFA’s internal governance: the Audit and Compliance Committee, the two chambers of the Ethics Committee, and the Governance Committee.

For instance, she criticizes the way FIFA suddenly dismissed 13 of 15 members of the Ethics Committee during its 2017 Congress in Bahrain, including the chairmen of the committee’s two chambers, Cornel Borbély and Hans-Joachim Eckert. Also the head of the Governance Committee, Miguel Maduro, was removed without notice.

All three had been or could soon be dealing with matters that went against the interests of President Infantino, according to The Guardian and other sources.

“The way all this happened cannot be reasonably considered as a normal turnover of key positions and, regretfully, the general feeling is that the FIFA Council and Mr. Infantino in particular wished to get rid of people who might have embarrassed them,” Brasseur concludes.

In addition, she questions the competence on one of the replacements, the former President of the Colombian State Council Maria Claudia Rojas, who is a professional “at the highest level”, but:

“She does not meet the profile of a “prosecutor”, which was clearly the case of her two predecessors […] her lack of knowledge of English and French is a major obstacle, as almost all documents are in one of these two languages. This is not merely a factor that risks slowing her down in her examination of case files […], but it also means – and this is much more problematic – that she is more dependent on the secretariat that assists her and that it is objectively difficult for her to enter into confidential contacts with witnesses or experts.”

FIFA’s response is a detailed overview over all the formal procedures that have been observed when picking the new committee members and a list of many of the new chairs and their main job experience.

“It is up to any reader to compare these CVs with those of the previous office holders and make a judgement based on facts, and not on speculation,” FIFA writes, continuing:

“… to assume that governance solidity within FIFA may depend on the maintenance of a few specific individuals — and individuals who were elected or appointed under the old regime, through processes that were not transparent — is to disregard completely the very nature of the reform process.”

In a curious move, someone at FIFA must have inspired former Colombian President Andrés Pastrana to step onto the stage with a fuming letter to the Culture Committee. Referring to the decisive role of Argentina and Uruguay in the history of the World Cups, he finds that “attacking a high-ranking FIFA leader because she allegedly only speaks Spanish is an inadmissible act of discrimination”.

How the historic triumphs of Hispanic teams will help Mrs. Rojas when facing thousands of pages in languages she cannot read, is not explained in the Ex-president’s letter.

Another noteworthy fact is that UEFA’s response to Anne Brasseur’s report could not be more different from FIFA’s. UEFA’s National Associations Director Zoran Laković is almost jubilant in a circular mail to UEFA’s members. The report “enlists support for UEFA’s recent statutory reforms in very clear terms. […] We are pleased that the vast majority of observations to be found in the Report are positive for the European football family”.

Apart from a general concern over the image of the new FIFA leadership, FIFA’s energetic lobbying may have another reason. Anne Brasseur proposes that PACE calls on the EU, the Council of Europe and major sports organisations to “examine the feasibility and promote the establishment of an independent observatory entrusted with assessing the governance of football by placing the emphasis on, amongst other things, ethics and the integrity of elections. This would not confer on this observatory the power to govern the sport but to ensure that the principles of good governance are being effectively implemented and shared”.

It is ironic that football once again is stealing most of the focus in a sports debate, especially because Mogens Jensen’s report “Working towards a framework for modern sports governance” goes even further than Anne Brasseur’s in its ambition for government involvement in the life of sports organisations.

Jensen proposes no less than

And in his concluding remarks, Mogens Jensen sets the bar even higher:

“In the long-term vision, the ideal solution would be to create a global sports governance foundation which would have its own multi-stakeholder board of advisors, a proper board of directors and independent funding.” 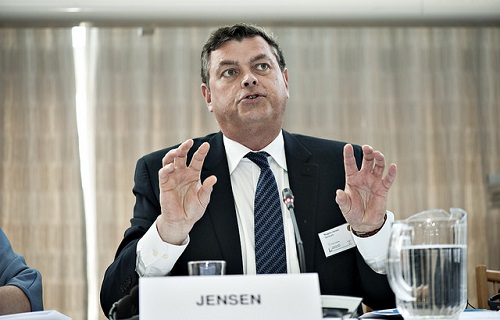 There is a silver lining in both reports, in Jensen’s words: “The crisis of confidence seems far from over […] the sports movement cannot be left to resolve it failures alone.”

Whether or not the sports movement accepts to be accompanied by the European parliamentarians or anybody else, is another matter. Much will depend on the political resolve that the Council of Europe will display.

There are many constructive proposals on the table on the 24 January, perhaps too many. The main recommendations of the two reports would stand a better chance if they are edited into one set of clear priorities.

There is a risk of diluting the political impact if the limited resources of the Council of Europe are spread over too many initiatives. There is also a risk of getting distracted if controversies with FIFA take up all the time. European parliamentarians have a unique chance of sending a clear signal: That they will secure independent oversight over the governance of sport.

“There is a lack of strong leadership in the sports movement today for taking the sports governance and integrity matters in hand,” Mogens Jensen writes. So much more reason for the Council of Europe to take the lead again.

Declaration of interest: Play the Game has given unpaid consultancy to MP Mogens Jensens’ report from June 2016 to the summer of 2017, and in recent days. To inspire the report, PACE and Play the Game joined forces in organising the seminar “Hands on, hands off? The role of politicians in reforming sports governance”. Play the Game is a member of the Consultative Committee of EPAS and the author is chairing the committee.